Why One-Shots Rock (Plus Recommendations)

A One-Shot is Completed in One or a Few Sessions

People say it’s rare to start and finish a one-shot in fewer than four to six hours of gameplay. I’ve luckily mastered the two-hour one-shot through lots of trial and error. The key to this is gearing the game directly to your party’s needs. If they go heavy in role-playing, you’ll need to cut story corners to give them plenty of time to enjoy critical plot points.

I mean, honestly, any D&D game can be as ridiculous as you want it to be. But there’s something to a one-shot. You can run a wild story and allow players to create throwaway characters. Here are a couple examples of one-shots that I’ve played in that were ridiculous. In the first video, I played Strahd after leaving the Astral Realm to join a new party in space. She was a mechanic that had no idea what she was doing but could spider climb to high places to hit things with her wrench. In the second video, I played a half-mermaid/half-centaur that got the horse and fish side of each. Enjoy. (Both games took place on Gilding Light and are DMd by one of my best friends, DC Lasair!)

A one-shot can stand on its own with no connection to anything else you put in front of your players. It can be a side-quest in the world where you’re currently playing a long-term campaign. You could also connect a one-shot to another and create a string of quests that make an excellent gaming series. It’s totally up to you!

If you’re hoping to make it through your story in a single session, you’ll have to cut corners. You can do this while maintaining the dignity of your most critical plot points.

Limit the number of choices your players have and push them along as necessary. The beginning of the game is an easy place to railroad in a way that doesn’t feel obnoxious. Don’t drag out their quest hook. Their pull into the story should be pre-established or extremely simple. If you give them too many choices, in the beginning, you’ll have a lot of trouble getting them where they need to go. In that regard, make the PCs already established with each other. They’ve been adventuring together for years. That way, there’s no need to go through the “getting to trust you” phase.

If the players aren’t finding what they need to move the story along, throw in a helpful NPC. If combat is going too long, cut it short and have everyone collaboratively decide how the goblins were defeated.

Out of game, try to cover your session zero and safety tools through a medium such as Discord. You’ll want to take care of as much of the non-game stuff as possible before the session to save time. Make sure players come to the game with their characters already prepared. You could offer them pre-built characters as well. One of my kids has designed a Jumanji (new generation) themed DnD game where we have no idea who our characters/avatars are. We have to fill out our character sheet as we play the game!

One-Shots Have a Distinctive Style

Where ongoing campaigns may dabble in different styles and conventions of TTRPG gaming, a one-shot can be more focused. Is it a silly game, a horror escape room, or an introduction to the fey wild? I still recommend having at least one social encounter, one exploration encounter, and one combat encounter in your one-shot. That said, you can still make a distinctive concept to run with. Is it a dungeon crawl, farm quest, or carnival experience?

One-Shots Are An Amazing Icebreaker

If you want to run a long-term campaign, I recommend using a one-shot as an icebreaker for your party. This will tell you if they have good chemistry together. I like to run a one-shot as part of my session zero – especially if we’ll be doing a live stream show. (I’d love to write more about my tips and suggestions about prepping and running live stream DnD shows!) I highly suggest you make sure your team can work well together before committing to long-term or live streaming. One-shots are the way to test that. Also, the story can then just be connected to the greater campaign however you see fit. 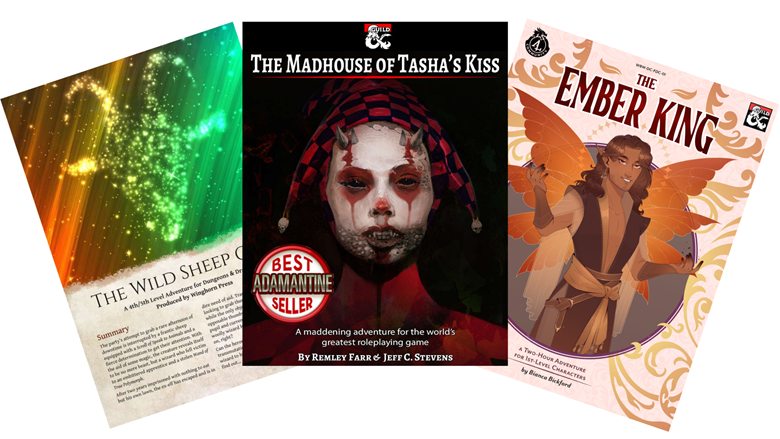 Wild Sheep Chase – This one is a silly game where “downright weirdness erupts when the party’s attempt to grab a rare afternoon of downtime is interrupted by a frantic sheep equipped with a Scroll of Speak to Animals.” Yeah, count me in.

The Madhouse of Tasha’s Kiss – Love horror? Jeff Stevens is brilliant when it comes to horror in Dungeons & Dragons. (Plus he’s a really cool dude.) “A small village, empty of villagers except for one boy found sitting and weeping next to a jester’s pageant wagon. The boy explains that the villagers, including his family, followed a jester into the wagon and never came out.”

The Ember King – “For new Feywild explorers, the benevolent Ember King offers advice and their first adventure in exchange for the tale of their exploits.”

Disaster Hamsters – “Play as a party of sentient hamsters attempting to escape from the compound of a nefarious alchemist in this brand new storyline” Like, come on!